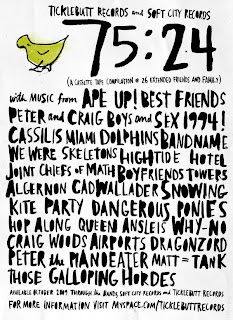 hey everyone! so danny(boys and sex), and jeremy(band name) live in a great warehouse with a bunch of other rad people (peter,joe,kyle,marshal, kat, greg) called big mamas warehouse. Big mamas warehouse throws shows, has a beautiful recording studio called headroom (where we recorded our EP), and an in house screen printing press. all of these people are in great bands, like boys and sex, peter and craig, algernon cadwallader, band name, and kyle is in dangerous ponies. So danny had the idea to put together a compilation of in house bands, bands that are good friends that have played at the house, and great bands that are good friends with the house or bands in it. This is an awesome way to promote musical community, and there is going to be a great release show for the cassette compilation, featuring ALGERNON CADWALLADER, BOYS AND SEX, DANGEROUS PONIES, HOP ALONG QUEEN ANSLIES, and BANDNAME. We will be selling them at the cassette release and also at our shows. hopefully if this goes well for danny and the bands it will turn into a compilation of 7 inches of all sorts of things like b-sides and rare takes HOPEFULLY recorded at head room they're in house studio. so here are some of the graphics designed by greg (bandname)
Posted by ponieparty at 7:56 AM No comments:

do you ever get scared?

when i found out the beatles albums were getting re-mastered, i'm not going to lie... i was a bit freaked out. i thought to myself 'what could they possibly do?' it sounds so good, so full, so perfect, so warm. but i heard it, and they didn't rob it of the warm tone that i adore so much. i mean i'm not expert, human sound memory isn't very long, but just take a listen to the beginning of the old version. stop it then immediately start the other one, so good.

Posted by ponieparty at 6:43 AM No comments:

hello loves! so... we have a crush, on punk rock payroll... and wouldn't you know the feeling is mutual. So we are going to be working with them for a while, going on a few dates, talking about boundaries, and they will be putting out our self title full length this summer WOHOOO.

for those of you that don't know anything about punk rock payroll, they rule. Awesome people doing awesome things for awesome reasons. and we are getting involved, and are very excited about it.

The other bands on the label are the extraordinaires, kill you in the face, and lux perpetua. We are having this swell PRP label show case at kungfu necktie on sunday the 8th of november. Now KFN is a really sweet venue, but not the largest, so for those of you that want to be there try and get your tickets as soon as possible, because we want some ponie love in the place.

heres a link to where you can buy tickets:
http://www.ticketweb.com/t3/sale/SaleEventDetail?dispatch=loadSelectionData&eventId=2668524